Contents : The Evangelical Review of Society and Politics Vol. 2, No. 2 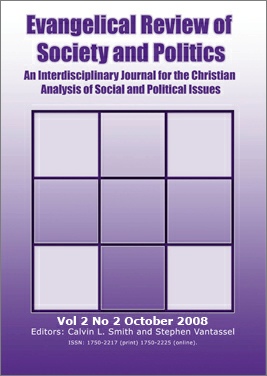 THE EVANGELICAL REVIEW OF SOCIETY AND POLITICS
VOL. 2, NO. 2, OCTOBER 2008

ABSTRACT
This paper examines the theological principles which provide the foundation for a Christian approach to torture and the argument for 'doing evil in the name of good'. It also considers the connection between individual acts of violence and broad-scale socio-political principles. There is an examination of two books related to torture: Alexander Solzhenitsyn's The Gulag Archipelago and Naomi Klein's The Shock Doctrine: the Rise of Disaster Capitalism. The former deals with radical communism and the latter with extreme capitalism. The conclusion reached is that torture can never be justified as an evil done for the common good. This does not rely on the commonly cited reasons of natural law, social justice, a shared humanity or human rights but more specifically and cogently on evangelical themes relating to the call to participate with Jesus Christ in the covenant community of God. The concept of the nation as a good in itself is challenged by the universal call to belong to God's covenant community; the moral status of the human person as influenced by the imago dei is interpreted in a more communal fashion than usual; the possibility of a moral duty to perform an otherwise evil action is contrasted with the idealistic nature of Christian love; and the concept of human rights is explored in terms of a responsibility to God rather than as intrinsic rights belonging to individuals.

Brian Edgar, “From the Gulag Archipelago to Guantanamo Bay: An Evangelical Assessment of Torture.”

ABSTRACT
This article argues that New Testament texts about possessions, property and wealth provide prophetic paradigms for consumerism today through the hermeneutic lens of idolatrous greed. New Testament texts are examined in five contexts, each of which generates a paradigm for consumerism: the context of discipleship gives rise to a paradigm of liberation; of community, a cross-shaped paradigm; of the kingdom of God, a paradigm of reversal; of transience, a resurrection paradigm; and of powers a paradigm of disarmament. These paradigms, it is maintained, offer the church a multifaceted, but unequivocally defiant response to the consumer culture that threatens to engulf society today.

Reviewed by Paul A. Brink, Christopher D. Miller and Jonathan Chaplin, with a response by Kristen Deede Johnson.

Inger Furseth and Pal Repstad, An Introduction to the Sociology of Religion: Classical and Contemporary Perspectives.
Reviewed by Derek Tidball

Alistair Kee, The Rise and Demise of Black Theology.
Reviewed by Colin Warner