Contents : The Evangelical Review of Society and Politics Vol. 4, No. 1 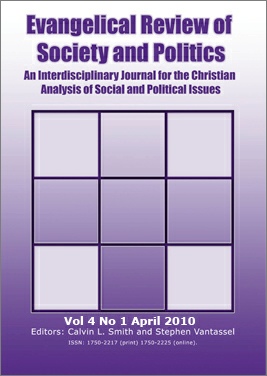 KEY WORDS
Media. Christianity and Media. Faith and the Public Sphere. Portrayal and Perceptions of Evangelicals.

ABSTRACT
This article begins by summarizing recent research findings related to the Canadian news media's perceptions and portrayals of evangelicals. It discusses how the media's depictions, in conjunction with evangelicals’ own actions, contribute to a primarily negative public image for this faith community. Referencing key concepts from Christian doctrine and communication theory, this article concludes with suggestions as to how evangelicals in the West might improve their collective reputation with the non-evangelical population-at-Iarge.

ABSTRACT
For Adam Smith, divine providence concerns itself with the happiness of humankind. History is the story of this divine providence in four epochal stages, each stage succeeding the one before by means of commercial progress. Political authority is made subject to economic force. Adam Ferguson, Smith's contemporary, argues to the contrary. The historical development of humankind is not economically progressive, and neither is divine providence concerned with maximizing human happiness. Focus on fiscal prosperity often has the reverse effect, undermining political institutions and corrupting human character. When political authority is usurped by economic forces it yields both personal and social ruin. The Christian gospel illustrates how and why the Political must always subordinate the Economic, since the economy of Christ's death is premised on his Sovereignty.

Amos Yong and David Cowan, “Two extended reviews of Nimi Wariboko's God and Money: A Theology of Money in a Globalized World”

David M. Haskell, Through a Lens Darkly: How the News Media Perceive and Portray Evangelicals.
Reviewed by Wayne G. Smith.

Ralf K. Wüstenberg, The Political Dimension of Reconciliation: A Theological Analysis of Ways of Dealing With Guilt During the Transition to Democracy in South Africa and (East) Germany.
Reviewed by Geoffrey Troughton.