Contents : The Evangelical Review of Society and Politics Vol. 5, No. 1 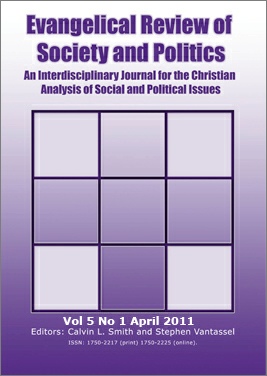 ABSTRACT
The article explores the use made of the Bible in the earliest phase of European political, economic and religious expansion. It traces the hermeneutic which underlay the expansionist ideology of the Iberian powers back to the influential eschatology of Joachim of Fiore and argues that in the fifteenth century his vision of a ‘Third Age’ of millennial glory was used to justify the ‘Conquest’ of South America. However, alternative readings emerged in the same period, in which the Bible was read from below and became the source of radical prophetic critiques of the Conquistadores. The lessons derived from this period are applied to the contemporary context, especially with regard to biblical hermeneutics in relation to modern globalization.

ABSTRACT
Calvin College professor, Matthew C. Halteman, argues that Christians should embrace vegetarianism as part of embracing Christ’s redemptive work to restore creation. After summarizing his reasoning, we evaluate the validity of his use of Scripture, logic, St. Basil, and other secondary sources to support his position. We identify several areas where his argument’s use of evidence was misleading. We suggest that this topic requires more substantive and objective attention.

Christopher Hancock, Robert Morrison and the Birth of Chinese Protestantism, and, Jean-Pierre Charbonnier, Christians in China A.D. 600 to 2000.’

Eric Gregory, Politics and the Order of Love: An Augustinian Ethic of Democratic Citizenship.
Reviewed by Amos Yong.

David G. Horrell, The Bible and the Environment: Towards a Critical Ecological Biblical Theology.
Reviewed by Stephen M. Vantassel,

Matthew A. Shadle, The Origins of War: A Catholic Perspective.
Reviewed by Stephen M Vantassel.