Contents : The Evangelical Review
of Theology and Politics Vol. 4, 2016

When Charles Darwin first published On the Origin of Species in 1859, evangelicals met his theory of gradation by natural selection with mixed reviews. Over fifty years later evangelicals remained unsettled on the effects of Darwin’s evolutionary theory on Christian anthropology. The diversity of opinions within evangelicalism were no more apparent than with the publication of The Fundamentals in 1917. While one of the purposes of the four-volume collection of essays was “to combat the inroads of liberalism,” the inclusion of three distinct viewpoints on evolution demonstrates that in the first quarter of the twentieth century evolutionary theory and evangelical theology were not yet seen as competing worldviews. This all changed drastically, however, in 1925 as a consequence of the so-called Scopes Monkey Trial. Although William Jennings Bryan successfully prosecuted John Scopes for violating Tennessee’s Butler Act which prohibited the teaching of evolution in public school, defense attorney Clarence Darrow deftly shifted the focus of the trial from Scopes to the compatibility of the Bible with Science. The Scopes Trial became a watershed moment whereby evolutionary theory came to be seen as conflicting with evangelicalism.

Article
David Graham, ‘What Modernity gets Wrong and the Classical Tradition got Right: A Critique of Bruce L. McCormack’s Theology’

This essay analyzes and critiques Bruce L. McCormack’s post-metaphysical theology, including his development of a so-called Reformed doctrine of kenosis. This critique is then utilized as an opportunity to highlight some missteps that modern theology—represented by certain forms of kenoticism—tends to make. The essay concludes with an endorsement of an alternative paradigm for doctrines of kenosis, one commonly found implicit in the premodern tradition. It urges Christian thinkers to balance two values in their theology: on the one hand, the contingency of creation and redemption upon divine freedom, and on the other, the fittingness of the economy of salvation with the divine nature.

Recent research has shown that European Christian Zionism is a numerically small, but vigorous, movement that has existed for a number of decades in Europe. By focusing on the European Coalition for Israel (ECI) this article demonstrates that Brussels provides a politically conducive environment for politico-religious lobby groups, where the ECI employs both defensive and offensive strategy in its pro-Israel campaigns. Whilst its lobbying regarding the two-state solution remains largely unsuccessful, its contributions to fighting antisemitism are substantial, thus confirming that successful lobbying by politico-religious organizations in Brussels is conditioned by the EU’s normative values.

The Evangelical Review of Theology and Politics
ERTP Forum : The Church, Evangelism, and the Political in Countries of the Western Pacific Rim

Review Article
Revelation and the Political in the 21st Century: A Review Essay

Ryan Leif Hansen, Silence and Praise: Rhetorical Cosmology and Political Theology in the Book of Revelation.

Stephen D. Moore, Untold Tales from the Book of Revelation: Sex and Gender, Empire and Ecology.

Joel Buenting (ed.), The Problem of Hell: A Philosophical Anthology

Jordan C. Ferrier, Calvin and C.S. Lewis: Solving the Riddle of the Reformation

Review
James K. A. Smith, You Are What You Love: The Spiritual Power of Habit, Grand Rapids, MI: BrazosPress, Baker Publishing Group, 2016.
Reviewed by Ashley Staggs-Kay.

Note, page numbering is chronological, and is unique to each section, that is, each form of material. The first article to be published each year will be pp. A.1-12 (for instance); the second article pp. A.13-29, and so on. Page numbers for articles are prefaced by
a capital A. (and so on)— 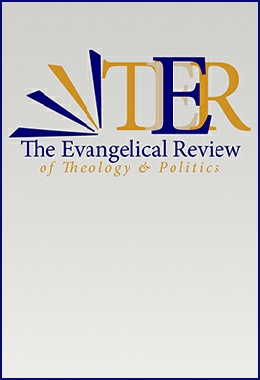