Contents : The Evangelical Review of Society and Politics Vol. 1, No. 1 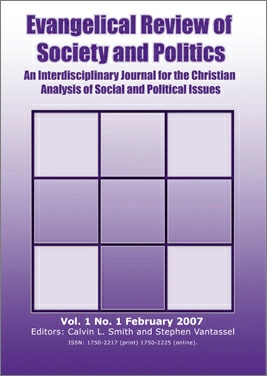 THE EVANGELICAL REVIEW OF SOCIETY AND POLITICS
VOL. 1, NO. 1, FEBRUARY 2007

Editorial: “The De-Privatisation of Faith and Evangelicals in the Public Square,” by Calvin Smith (with Stephen M. Vantassel).

ABSTRACT
Prior to the 1980s many sociologists and political scientists dismissed religion as a determinant of political behaviour. Yet the explosion of Protestantism in Latin America and the rise of radical Islam have propelled religion back onto the political stage. As recent events in Britain demonstrate, the country is beginning to question the merits of multiculturalism and invoking its Christian heritage in the process. Thus, as Christians in Britain and elsewhere awaken from the long slumber of privatised faith, how might Evangelicals formulate a coherent political world view and compete in the public square?

Richard Gibb, “Grace and Agents of Justice in a Globalised World.”

ABSTRACT
How is the church to interpret its mission in an age of globalization? This paper seeks to explore the implications of the church's distinctiveness as a grace-defined community for its socio-political mission in a globalized world. The conclusion reached is that this central Christian doctrine directs the Christian community to be an agent of God's justice in the socio-political arena through demonstrating servant-leadership to contribute in enabling the world's poorest and weakest citizens to share in the benefits brought by a globalized world.

William F. Cox, Jr., “The Inseparability of Education and Religion and Implications for Federal Involvement in Education.”

ABSTRACT
Numerous factors support the Constitutionally relevant argument that education is a religiously oriented activity. One such factor is that the U.S. judiciary's operational definition of religion brings education within its jurisdictional boundaries. Another reason is that many judicial decrees regarding educational content and practice emanate solely from the First Amendment religion clauses where education is not even mentioned but is obviously subsumed by religious parameters. Moreover, the judiciary's double standard regarding proper parameters of religion keeps education dependent upon its religiously oriented decisions. Additionally, education invariably provides answers to questions typically considered within the realm of religion. The implication is that the federal government must be removed from control of education as with religion to fully restore the religious rights of U.S. citizens so long deprived.

ABSTRACT
These research notes describe the tortuous struggle for political power in Northern Nigeria, where religion plays such a prominent role. The paper traces the histories of Christianity and Islam in the North, their effects on the region's politics and economy, and the role of religion vis-a-vis the current national crisis.