Contents : The Evangelical Review of Society and Politics Vol. 2, No. 1 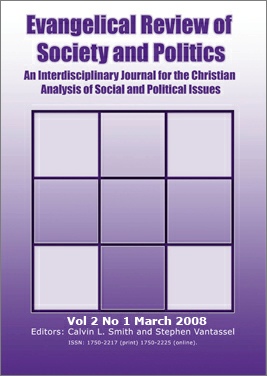 ABSTRACT
This article argues the point that foreign decision making in the United States demonstrates a strong public display of religion based on ideals that emanate from choices that have been made to build America into a competing international force. These are not passive decisions, but urgent choices related to pressing issues of presumed security. They become doctrines of policy-ideals that may not be diverted from by subsequent leadership without great risk. Within a background of early development in the Monroe Doctrine and international expansion in 1898 through the perceived turning point of NSC-68 to current practices in the Bush Doctrine, this article will demonstrate that American policy has consistently been to take custody of an increasing part of the geopolitical landscape because of foundational moral ideals. Once understood as the grafting of an overarching moral rubric into foreign ambitions, the current approach in President Bush's National Security Strategy discloses the reason for the loss of a multilateral international strategy.

ABSTRACT
In liberal democracies characterised by both advanced secularisation and religious pluralism, Christians need both to critically retrieve and re-articulate the rich legacy of Christian political thought which has profoundly formed modern political systems, and to come to terms with the new challenges and opportunities thrown up by post-Christendom pluralism. Christians have robust reasons to favour representative constitutional government, and they should engage constructively and confidently in democratic debate in pursuit of the public good. On the one hand, they should defend a "principled pluralism" which treats diverse religious perspectives equitably in the public realm, and, on the other, remain prepared in certain situations to display "confessional candour" as they speak from faith into democracy

David Smith, “Evangelicals and Society: The Story of an On-Off Relationship.”

ABSTRACT
The article explores the relationship between British Evangelical Christianity and socio-political action. It proposes that the roots of the movement are to be found in a Reformation understanding of religion as a prophetic force intended to bring about the transformation of the social world. However, this original world-transformative impulse was eclipsed in the nineteenth century as new forms of Evangelicalism emerged which were socio-politically conformist and developed an increasingly dualistic theology. Examples of Evangelicals on both sides of this divide are discussed and the article concludes by suggesting that, in a globalised world today, this movement needs to recover the socially transformative vision of its founders.

Kent A. Van Til, Less Than Two Dollars a Day: A Christian View of World Poverty and the Free Market.
Reviewed by Amos Yong

Robert W. Brimlow, What About Hitler? Wrestling With Jesus's Call to Nonviolence in an Evil World.
Reviewed by Stephen M. Vantassel

Ronald H. Stone, Prophetic Realism: Beyond Militarism and Pacifism in an Age of Terror.
Reviewed by Stephen M. Vantassel

Richard Gibb, Grace and Global Justice: The Socio-Political Mission of the Church in an Age of Globalization.
Reviewed by Jon DePriest