Contents : The Evangelical Review of Society and Politics Vol. 5, No. 2 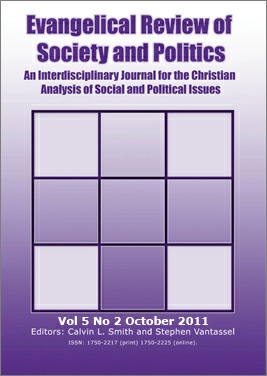 THE EVANGELICAL REVIEW OF SOCIETY AND POLITICS
VOL. 5, NO. 2, OCTOBER 2011

Christians and the British Courts

ABSTRACT
Paul Diamond is a Barrister (Chambers of Paul Diamond). He earned an LLM at Magdalene College, Cambridge, and a scholarship to the Hague Academy of International Law. He began working in the field of EU law, Constitutional Law and, subsequently, moved to the law of Religious Liberty. Paul Diamond was Standing Counsel to the Keep Sunday Special Campaign and is currently Standing Counsel to the Christian Legal Centre. Recently, he was instructed in the cases of a street preacher accused of ‘hate speech’ (Overd), a lady who did not want to work on Sunday (Mba) and for a doctor who discussed Christianity with a patient (Dr Scott). Here he is interviewed for the Evangelical Review of Society and Politics by Calvin Smith.

David McIlroy, “Understanding What Our Culture Demands of Its Judges”

ABSTRACT
Judges are being called upon to make decisions in a litigious culture and a consumerist culture. In this culture, choice is the ultimate value and criticism of another’s choices is therefore regarded as a serious wrong. The cultural priority given to freedom of choice has shaped human rights theory in the direction of possessive individualism. The weakening of the bonds of civil society has both accelerated the diversity of lifestyle choices and reduced the power of extra-legal mechanisms for dispute resolution. Judges are not only expected to be impartial between the parties but now to uphold the ideal of neutrality between differing lifestyles. A morally neutral balancing exercise is, however, an impossibility. What is coming to dominate judicial thinking in England is the assumption that equality requires consumers to have exactly the same access to exactly the same services from exactly the same providers. This consumerist conception of equality unjustifiably overrides freedom of conscience and is illiberal in its effects.

ABSTRACT
Recent reports in the media assert that Christian minorities are being legislated against by the British courts. The aim of this paper is not necessarily to assess the rights and wrongs of these decisions, per se, but to examine the claim to impartiality that the courts use in coming to such decisions, a claim that is by its very nature theological. This analysis will focus on the McFarlane and Johns cases as it is in these that the question of the legal standing of a Christian in a secular state has been re-defined in the context of liberal religious legalism. Initially, given the claim by the judiciary that Britain is not, and never was, a Christian nation, we can examine the religion of nation states (Isaiah 40); as such we can categorically define (drawing on the ruling of Lords Justice Laws and Munby) that the dominant religion in Britain is now neo-Pagan Secular Liberal Humanism. As such the establishment and the judiciary perceives of itself as non-religious, as if it was a neutral belief system. This opens up a theological doctrine of religion which denies the possibility of objective impartiality. We can then begin to examine the ethics and theological anthropology that underpins neo-Pagan Secular Liberal Humanism, drawing on the work of Solzhenitsyn. In conclusion we can assert that to be truly neutral and non-religious, essentially and necessarily objective, as the judiciary believes itself to be, is an attribute of God; for the judiciary to attempt impartiality, without acting eritis sicut Deus, they must accept the opposition to a particular personal moral stance as equal to those who seek to promote a particular personal moral stance; however, this is not necessarily the Church’s position, as dictated by scripture, revelation, and reason.

Wayne Grudem, Politics according to the Bible: A Comprehensives Resource for Understanding Modern Political Issues in Light of Scripture.
Reviewed by Stephen M. Vantassel