Contents : The Evangelical Review of Society and Politics Vol. 4, No. 2 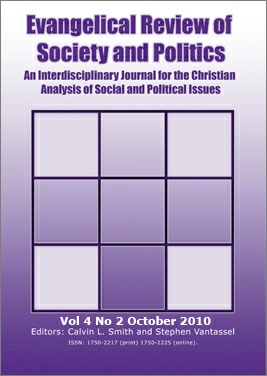 THE EVANGELICAL REVIEW OF SOCIETY AND POLITICS
VOL. 4, NO. 2, OCTOBER 2010

John R. Vile, “An Evangelical Perspective on the Religious and Political Views of M. Fethullah Gülen and the Gülen Movement.”

ABSTRACT
At a time of great tumult within the Muslim world, M. Fethullah Gülen, a retired Turkish cleric and widely-known public intellectual who lives in the United States, leads an influential group of Sunni Muslims in the Sufi tradition, who comprise the Hizmet (Service) Movement. Known for denouncing terrorism, for advocating love, tolerance, and interfaith dialogue, for advocating democracy, and for promoting education and sponsoring educational institutions, Gülen and his followers emphasize many of the same themes as American Evangelical Christians, and sometimes engender similar suspicions among secularists. Although the theological views of Evangelicals and Gülen on the nature of Jesus and the reliability of Christian and Muslim scriptures are ultimately irreconcilable, other points of agreement provide the basis for continuing dialogue, for cooperation against secularism and materialism, and for opposition to terrorism. The extent of this cooperation may largely depend on whether Evangelicals accept the sincerity of Gülen 's own commitment to democracy and whether Gülen and his followers now recognize that state laws or private violence against those who have committed perceived acts of blasphemy and apostasy are inconsistent with the Quar 'anic principle that "there is no compulsion in religion" and vest dangerous power in the hands of religious majorities.

Brian Kaylor, “Putting God Back in the Jeremiad: The Two Futures Project and the Argument for Nuclear Abolition.”

ABSTRACT
With new attention provided in recent years to the cause of nuclear disarmament, some evangelical Christians are attempting to energize Christians to join the cause. Although the leader of the Two Futures Project, Tyler Wigg-Stevenson, employs jeremiadic arguments, his rhetoric contradicts the claims of some scholars that the modern jeremiadic rhetorical form has become secularized. This study analyzes the rhetoric of Wigg-Stevesnon to determine how he uses references to God and scriptures to construct and strengthen his jeremiad and how he attempts to convince his audiences that they should view the topic of nuclear weapons from a religious perspective. Implications are offered concerning the modern jeremiad and how this rhetorical form should be conceptualized and analyzed by scholars.

ABSTRACT
Three examples of normative teaching from the Bible relevant to contemporary economic matters are reviewed. These are the desirability for Christians to promote business enterprise in which work is done in collaboration with God, to encourage forms of self-owned/self-managed employment, and to facilitate the equitable distribution of the wealth proceeds from work. The first three sections canvass aspects of God's and Jesus' teachings relevant to these matters, while the penultimate section gives examples of how the principles so deduced might be related by Christians to the organization of contemporary business.

John Milbank, The Future of Love: Essays in Political Theology, Nathan Kerr, Christ, History and Apocalyptic: The Politics of Christian Mission, and, Bryan C. Hollon, Everything in Sacred: Spiritual Exegesis in the Political Theology of Henri de Lubac.
Reviewed by Amos Yong.