Contents : The Evangelical Review of Society and Politics Vol. 6, No. 1/2 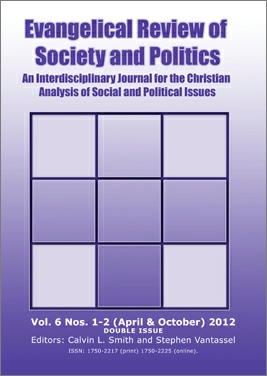 Michael Brownnutt, “Does the Current Emphasis on Postmodernism Help or Hinder Evangelical Engagement with Society?”

ABSTRACT
While postmodernism can be – and often is – regarded as antithetical to evangelical Christianity, many of the objections arise from evaluating it from a modern standpoint, rather than on its own terms. By clarifying a number of ambiguous terms many of the perceived issues vanish. Some remaining issues are problematic not because Christians have taken on too much postmodernist thinking, but because they have taken it on only partially and inconsistently. Taking the example of the challenge raised by new atheism, this article argues that evangelical engagement would be helped by more completely and more consistently embracing postmodernism.

ABSTRACT
This article presents an evaluation of Socially Responsible Investing (SRI) and its evangelical, faith-based equivalent, Biblically Responsible Investing (BRI), which is noted as sharing much in common with the broader SRI. The benefits of SRI/BRI have been well-explored in other literature but less commonly understood are some notable practical issues which are necessary considerations for potential investors. Presented in this article are the background and basis of SRI/BRI together with some important concerns. This research suggests that although SRI/BRI offers the possibility of improved ethical choices, the decisions that underlie these choices are not straightforward. A further contribution of this article is an assessment of long term financial performance of the MSCI KLD 400, the oldest and most significant SRI equities index, with the data suggesting that there is a financial penalty in pursuing SRI/BRI.

ABSTRACT
In this paper, I will argue that individual Christians can advance justice and social affairs when they replicate divine action, as modeled by Jesus, in which God engages individuals in such a way that highlights their value. To support this position, I will begin by framing the problem by briefly identifying the nature of evangelical theology and highlighting the relevant aspects of God. In the second section, I summarize a contemporary theory of justice from social philosophy (Silvers and Francis) and propose an application of this theory to religious diversity. In the third section, I will illustrate this proposal, focusing on interreligious dialogue and argue that as persons replicate divine action, a proper sense of individual value is promoted and bonds of confidence are established such that trust is developed; hence, justice is performed and social affairs affected. In the final section, I will address some of the problems raised by this proposal.

Timothy LIM Teck Ngern, “Blessings in the Prophets and the Wisdom: A Response to Charismatic Christian Hermeneutics, and a General Application for Christian Living.”

ABSTRACT
In the Old Testament Prophetic and Wisdom Books, blessings include both temporal and spiritual well-being, and are particularly associated with God’s gracious favor on the people’s earthly, temporal, and economic life. The earthly, temporal, and economic blessings from God follows God’s pronouncement of blessings and curses in Pentateuch (Deut. 28). However, the Old Testament teaching on blessings may pose a problem for the New Testament believer seeking God’s favor and blessings, if the overall understanding of ‘blessing’ is not qualified: after all, the New Testament (in focusing more on spiritual blessings, poverty, and suffering) downplays material wealth and comfort without totally eradicating material blessings. This paper presents hermeneutical principles for interpreting and applying the blessings of God, particularly taught in the Prophets and the Wisdom literature, to the contemporary believer caught in a culture of wealth and affluence. In particular, the essay responds to some contemporary Charismatic Christian hermeneutics, which emphasizes health and prosperity as God’s blessings. In the final analysis, prosperity is ‘a’ rather than ‘the’ blessing and it is not to be applied as a universal rule for Christians seeking to follow God.

P.H. Brazier, “The Just War Theory and the 9/11 Wars: A Biblical and Eschatological Consideration.”

ABSTRACT
In recent years there have been calls to re-write the just war theory for a war on terror, part of the so-called 9/11 wars. Just war theories abound; they are not necessarily Christian, however, it is necessary to consider a Christian response in the sixth commandment. Is Biblical theology rather than philosophical disputation now an appropriate ground for considering the justice of a war on terror? From scripture we find three war ethics: Pagan, Hebrew, and Christian. Which path characterized the so-called war on terror? The answer is in objective facts, statistics: actions not intentions. A Christocentric Categorical Imperative asserts that there are moral absolutes, which the Bible and Church tradition attest to. Any consideration of the war on terror must therefore be from the eschatological context of Jesus’ sayings and commands: for example, the return of the Landlord to the vineyard to settle accounts and weigh, sift, all according to his righteous judgement, also the dangers of religious practice by people who are irreconciled. This paper concludes that it may be justifiable to re-write the just war theory from a secular liberal humanist standpoint; however, from a Biblically informed eschatological perspective it cannot be justified.

Jeff Van Duzer, Why Business Matters to God (And What Still Needs to Be Fixed).
Review by Roger D. Duke

Peter Beinart, The Crisis of Zionism.
Review by Raymond Pfister

Stephen B. Bevans and Katalina Tahaafe-Williams, Contextual Theology for the Twenty-First Century.
Review by Allen Yeh

Van Til, K. A. The Moral Disciple: An Introduction to Christian Ethics.
Review by Stephen M. Vantassel